8 Things I Wish I Knew Before Visiting Greece

Let me preface this article by stating I had no knowledge of Greece prior to visiting. (And even to this day, I still have not watched Mama Mia or sang a song by ABBA.)

I just happened to be next door in Turkey, saw that the country was open for tourism (it was 2021), and decided to hop-on-over. (After a quick flight back to the United States.)

Now, I will not sugar-coat this article. I did not enjoy Greece as much as some people.

It’s not because of the country or the people. However, it’s because I want to focus on adventure travel. (which Greece lacks).

If relaxing on the beach or renting a boat sounds like the ideal holiday, Greece might be the perfect vacation spot for you! 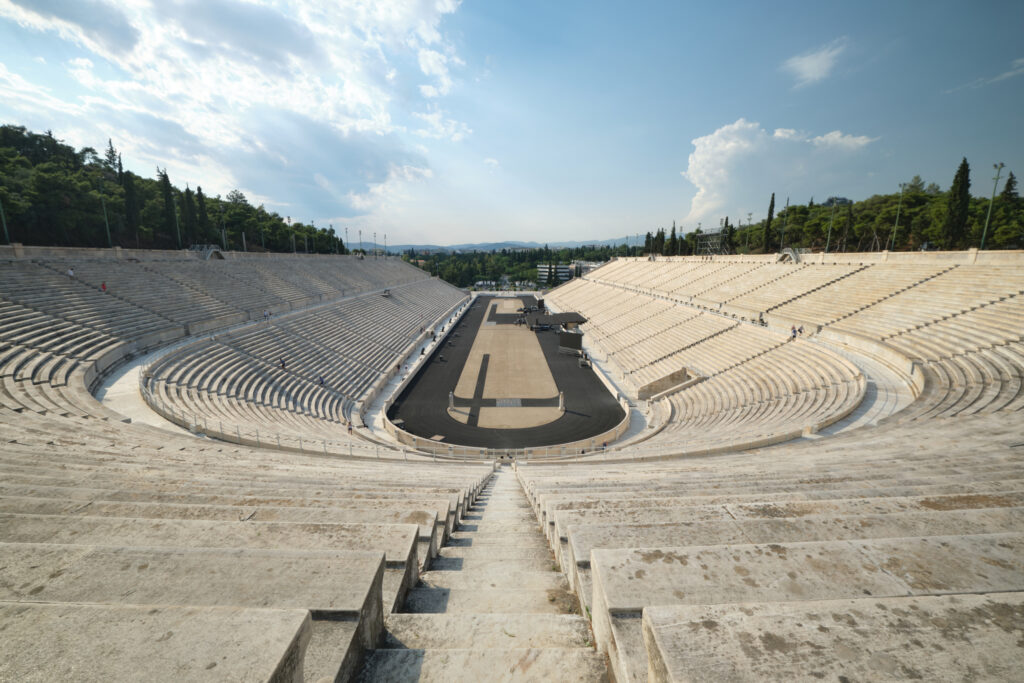 How much does a vacation to Greece cost?

If I had one word of advice to someone planning a Greek vacation, it would be “Be prepared to spend a LOT of money…. if you want the Instagram portrayal.”

Watching the sunset in Santorini or partying at the clubs in Mykonos with its beautiful, white-washed buildings are some of the most expensive travel destinations in the entire Aegean Sea.

To get an idea of pricing of pricing, let’s use Mykonos and Santorini as an example.

Food at a sit-down restaurant in Greece will be at least 15 Euro, and just as hotels gradually become more expensive, so do restaurants.

However, take-away restaurants that serve souvlaki or a gyro begin pricing around 5 Euro. (Similar to a hamburger in the United States.)

Now, here is something I learned about Greek food on the islands.

Sometimes, purchasing groceries on the Greek islands is more expensive than eating out.

When I purchased groceries for a four-day workweek, the total cost was around 40 euro. This price included Peanut Butter, Jelly, Bread, and a few other fresh items such as bananas, meat, and cheese.

Groceries in Greece are expensive due to the shipping cost from the mainland to the islands.

Just like tourists, all groceries have to be flown in/ferry unless they are farmed at Naxos. (A major Cyclades agricultural hub.)

Activity prices are going to vary wildly depending on your personal travel style. For example, if you are a beach person, then your cost will be quite a bit less than someone who rents a boat.

Expect to spend about 20 euro for a chair on the beach. (Per day and excluding drinks)

Total Price per Person per Day

The best estimate for a Greek vacation (per person-per day) is between 150 to 250 euro per day.

This price may be a bit conservative, but as with all holidays, everyone’s price depends on their own spending habits.

So, how can you save some money while visiting Greece?

Three ways to save money in Greece are

What are the Greek Island Chains?

Everyone who has visited Greece has a favorite island(s). (Hands down, the best island is Crete)

There are distinct island chains, each with their respective culture and famous sites: Ionian, Cyclades, Dodecanese, Saronic, Northeastern Aegean, Crete (It gets its own recognition.) and the Sporades.

Most tourists elect to spend most of the time within the Cyclades.

The Cyclades are the most popular due to typical Greek scene, the white-washed buildings, blue-painted roofs, pretty pink flowers, and towns that usually face towards the setting sun in the west.

Speaking of islands, pick a few islands that offer different things to do, but are close-enough that you do not have to island-hop too far.

For example, Santorini, Milos, and Crete.

What is Island-Hopping in Greece? 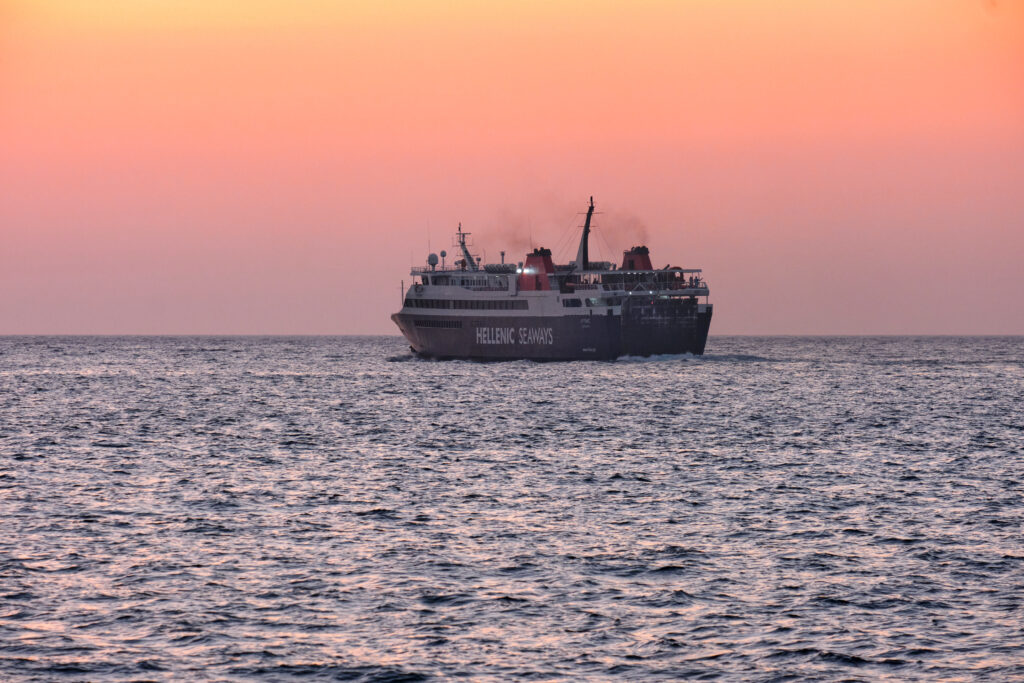 Whenever you travel between two destinations in Greece, there are two options for transportation: flying or the ferry.

Now, flying is limited to a few major touristic destinations such as Mykonos, Crete, Santorini, etc.

It does save a bit of time (I recommend flying between Santorini and Athens, for example.)

But when most people talk about “island-hopping,” they are talking about the ferry.

For me, the ferry served as a mobile coffee shop. (Blue Star Ferries have wifi.)

However, if you are not at the first port-of-call, you could be fighting for a seat. (Not literally, of course)

Ferries in Greece are lines of seats, with both reserved and un-reserved options in economy. So, you may not get to pick a seat with your travel partner(s).

That’s why I recommend either reserving your seat (cost $) or upgrading to first-class.

How to Travel around a Greek Island

Now, here is another reason to pick your Greek island carefully.

Transportation around a Greek Island varies via the island you choose (of course.) Some islands will offer buses, others might use ATV’s, and some might need a scooter!

However, one thing remains constant. If you intend to rent a vehicle, you (Americans) will need to make sure you have an International Driver’s Permit.

(Please Note: An PERMIT not a LICENSE.)

An international driver’s permit translates your license into about 10 different language, and they can be picked up at your local AAA. The permit will cost $20.

Other Note: Whenever you get off the ferry, make sure you have a plan to arrive to your hotel. Sometimes, hotels have an option for drop-off and pick-up.

Well, since we are talking about hotels, let’s just say

Tom, a friend of mine I met in Istanbul, really nailed this one.

Most people come to Greece for two reasons:

#1 Relax on the Beach

I don’t drink, and I am not a huge beach person. (It’s just boring.) So, Greece isn’t a great destination for someone with my interests.

I would rather rent a boat and go out snorkeling or scuba diving. Or maybe explore some historical ruins (reason #3 to visit Greece). However, there is only so much of that lifestyle I can handle.

If you do plan on coming to Greece for the beach life, the best months are May and September. (Less people and still warm weather.)

The Greek Mainland is Underrated

Athens is wonderful. There are numerous open-air museums, good food, shopping, and friendly locals. (Although, Athens is not inescapable from its problems since the Financial Crisis.)

However, beyond Athens, there is also the Peloponnesian Peninsula, home of sites such as Sparta in the SouthWest. Mount Olympus in the North.

And the most hidden gem in all of Greece, the Greek Rivera is only an hour away!

Honestly, there were so many historical sites and museums in Greece that it was overwhelming.

I studied Greece in college for a class, and even I didn’t quite understand the significance of each rock.

In order to understand a place fully, you will need someone or something to explain. (Maybe a good guidebook… or Wikipedia like me.)

Just a warning: When it comes to visiting historical sites in Greece, pace yourself. Otherwise, burnout will set-in.

As always, that’s all I can think of right now. Questions? Tweet at me @worldembark.

Otherwise, I hope you have a great day! 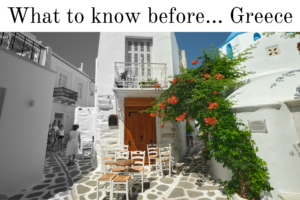 8 Things I Wish I Knew Before Visiting Greece

Let me preface this article by stating I had no knowledge of Greece prior to visiting. (And even to this day, I still have not watched Mama Mia or sang a song by ABBA.) 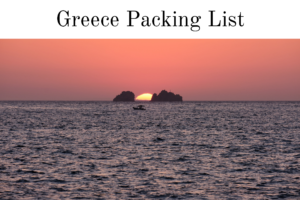 The parties of Mykonos, the Santorini sunsets… It’s VERY easy to see why Greece is an allure for many. But what do you need to pack?