Right in the middle of other Fujifilm XF telephoto zooms, (in regards to both price and focal length), the Fujifilm 70-300 F4-F5.6 is made for travel. It’s well built, weather resistant, and the locking feature prevents zoom creep while stored away in a backpack.

Adding in all of that, it’s no surprise that since the March 2021 release date, the 70-300 has been continuously sold out at all major retailers. It isn’t too much bigger than the 55-200, and as a bonus, it also accepts teleconverters.

However, despite all of these pros, the Fujifilm 70-300 F4-F5.6 does suffer as it does not handle low-light too well, might be too tight for city photography, and is almost $800!

Within the telephoto and super-telephoto XF lens category, Fuji shooters have gained numerous options within the past couple of years. Almost every price point and focal length is covered, from 50mm to 600mm (600mm = 900mm on a Full-Frame Equivalent)

In no particular order, here are a few XF telephoto zoom and prime options that cover some of the 70-300’s focal length.

(In a later post, I will be comparing all of the zoom lenses, together! It’s going to be crazy!)

Instead of cropping manually, I have now added the option to zoom in on each file so you can examine the sharpness of the 70-300 yourself! Please note: These Photos were exported at 50% of the original file size.

After opening the photo gallery, click the magnifying glass, and check it out!

Unlike some Fujifilm lenses, the 70-300 F4-F5.6 did not suffer serious image quality degradation as you extended into the zoom range.

However, from the Brick Wall Test above, I have a few takeaways.

If a lot of your traveling is focused on city photography (or if you live in a city like me) the 70-300 is going to feel tight.

For example, I wanted to take photos of cars passing by. (You can see examples of my view in the IBIS/OIS Test below.) However, my FOV was just too close. If you have something like the 50-140, these images would be very easy to photograph.

With this lens’s sharpness too, I could easily crop from the 300mm and still create a good photo.

However, if you want to attempt and create a wider point-of-view via panorama, it’s actually going to be difficult.

Attempting to create a panorama with a longer lens means you will have to go side-to-side BUT also take photos up-and-down. (Basically, a Giant-S)

If you are doing this, create the panorama in post-processing AND take way more photos than you need.

It’s always easier to delete after the fact than go back and re-shoot.

Here are just a few random Fujifilm 70-300 sample images to break up the monotony of this lens review.

The photograph of the Lincoln Memorial was shot from the WWII memorial. ^

However, this lenses variable focal length and close focusing distance (2.7″) can create for some pleasant Bokeh experiences.

Let’s take, for example, this photo of tourists at the American National Mall.

The Bokeh really does fall-off quite well, and the trees don’t look “busy” like some other Fujifilm lenses.

All around, although the bokeh is pleasing and provides a shallow depth-of-field, this is more due to the focal lengths used (ex: 300mm @ F5.6) rather than the aperture.

In regards to Bokeh Balls, this lens performed amicably. As a bonus, there were no onion ring effects with this lens at any aperture.

Starting at F4, we don’t exactly get round Bokeh balls. If you have seen the 33mm f1.4, this lens performs remarkably similar in the corners.

And by the time we stop down to F8, this lens performs very well. As seen in the photo above, the bokeh balls are round throughout the entire frame.

The Fujifilm 70-300’s autofocus is excellent, (as pictured in the video below) and after testing every XF telephoto lens, I think it might be one of the fastest within that niche.

I used continuous tracking at 15 FPS with the mechanical shutter. However, I also just used the face-focusing instead of the eye autofocus. After examining the images, I think my keeper rate was about 75%.

If the subject was running toward me, the X-T4 was able to find the subject. However, if they turned their head even a little bit, I lost them.

As you can see in the video autofocus test below, I felt that the Fuji’s 70-300 performed well in regards to recognizing my face and tracking my eye. Sure, it did lose me as I finished out the test by walking up to it.

However, I was really close, so much so my face was taking up the entire frame.

One of the biggest surprises when they announced this lens was the focusing distance, 2.7 feet or .8 meters.

Now, after testing the 100-400, I ended up missing the 70-300 because of the close focusing distance because you cannot predict the flight path of birds. So, if a bird lands right in front of you, you won’t be able to get the shot with the 5.5 foot focusing distance of the 100-400.

This close focusing distance, a maximum magnification ratio of .33x, and the ability to use a focal length of 300mm (FF 457mm) create some awesome photographs.

The color accuracy on this lens is the same as other XF lenses. However, if you shoot RAW, you can change the colors via tone or saturation. For example, the flower in the middle was not that pink. (Compare it to the one on the left.)

It just goes to show that you cannot trust everything on the internet.

However, that number might be slightly exaggerated. All around, I was able to get hand-held video at 70mm and if I wanted to introduce even more stabilization, I could introduce some in post-production.

However, I am pretty hesitant to extend the camera lens much further than that.

The further you extend a camera’s focal length, the shakier the footage will become.

All around, if I had to compare the sunstars from each Fuji XF Lens, it would go

One of my favorite features of this lens is probably the cheapest to implement from an engineering perspective, the zoom lock.

It prevents lens creep while you’re traveling, which prevents the lens from becoming damaged.

Again, the sharpness is good enough for me throughout the entire focal range.

That extreme focal length allows for some shallow shots for portraits.

I really had two major cons with the 70-300, one which is my photography style and the other with the aperture.

Look, I live in a city about 80% of the time. And at this point, I felt like the focal length was just a bit much for city photography. (And not enough for city portraits.)

When starting at 70mm, you cannot just take a picture of something in front of you. You will have to step back about 10 feet, and then take the picture.

However, I couldn’t always do that.

If you go back and look at the IBIS/OIS video, you will see the camera is actually angled instead of directly shooting at the cars in front of me.

This was because I was just too close, and there was a wall behind me.

When you purchase this lens, you know that the aperture starts at F4 and ends at F5.6. However, as the sun starts going down further and further, you will start to feel very limited as the ISO will keep going higher and higher. (Or you could lower your shutter speed and rely on the 70-300 and X-T4’s IBIS and the 70-300’s OIS.

The weather resistance, ability to accept teleconverters, OIS, sharpness at all focal lengths, and having an impressive FOV create an impressive travel lens with some flaws that can be mitigated with other lenses.

Or you could pair this with the 16-55 (because the 16-80 is a horrible lens) and create an awesome two zoom combo with enough sharpness to cover the gap between 55 and 70mm.

This lens is very reliable, well-built, and all around an excellent travel lens. I would happily take it on an around-the-world adventure.

Sometimes, it did feel just a bit too long. But pair it with another lens for night photography and you will be good.

These are always bonus points. But the 70-300 looks classy. 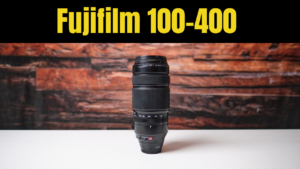 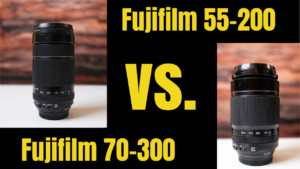 The two budget telephoto zooms for the Fuji X-Mount, the 55-200 and the 70-300 have numerous similarities. 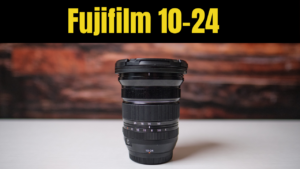 Quick Facts about the Fujifilm 10-24mm F4 OIS WR Lens Weight: 13.6 oz/385 Grams Weather Sealed: Yes (There is a previous version that is not.